45 tasks were designed to measure logical ability in a fixed, linear testing format. The tasks followed a similar structure as other established tests on the market, such as Raven’s Matrices and the Figure Reasoning Test (FRT).

In a small pilot study, results on this test were compared to FRT version A, a test used for admission to Mensa in Sweden. In a sample of 39 participants, the correlation was 0.77, which is considered Excellent by the European Federation of Psychologists’ Associations (EFPA).

A norm table was developed, based on results from 311 Alva users. Based on the number of correct responses, a standard score with the following interpretations was provided. 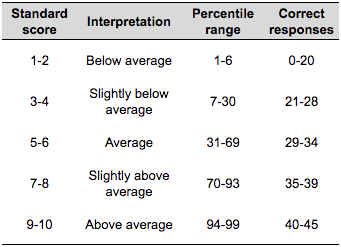