This article describes the process that was employed to determine the validity of Alva’s logic test.

The construct validity of Alva’s logic test was estimated using a sample of 134 participants who completed both Alva’s test and Raven’s Standard Progressive Matrices Plus (SPM+). The observed correlation was r=0.83, which is considered Excellent by the European Federation of Psychologists’ Associations (EFPA).

Instruments
Alva’s logic test is a computerized adaptive test aimed for professional assessments in recruitment settings. Raven’s SPM+ is an extended version of the original matrix test, used since 1938 to measure abstract reasoning - an important part of general intelligence.

Study
Participants were recruited using Amazon Mechanical Turk. They were asked to complete 39 tasks from Alva’s item bank and 36 tasks from Raven’s SPM+ in two separate sessions with one week apart. The standard score for Alva’s test was calculated using the Expected A Posteriori (EAP) method, with the same model, item parameters and prior distribution as in the live test. The total score was used to represent results on Raven’s SPM+. Tasks from sets A and B from SPM+ were left out, due to being overly simplistic, and the total score was estimated using table 35 from the SPM+ manual. 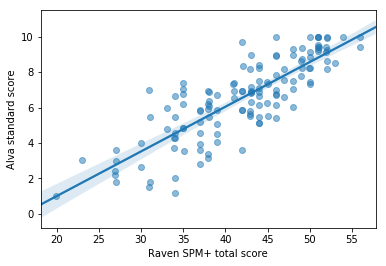