How to draw insights using the Team Fit graph

Written by Ludvig Wettlen
Updated over a week ago

In Team fit, you are able to map potential new hires to current team members, to see how certain candidates would fit the team. This article will help you to interpret the mapping.

The horizontal axis represents a person’s preference for reflection versus stimulation, which can also be interpreted as a preference for finishing versus initiating. The axis is based on the Openness facets Curiosity and Change orientation, and the Extraversion facets Assertiveness and Energy Level. The vertical axis shows the extent to which a person is result oriented versus relationship oriented. This is based on the Conscientiousness facets of Goal orientation and Carefulness, and the Agreeableness facets of Compassion and Politeness.

Interpreting the graph - some guidelines

Based on the above, results in the graph can be interpreted according to the following rules of thumb. Note, however, that there will always be exceptions and that these guidelines are based on general patterns. Do not take them as absolute truths, but rather as indications of potential strengths and challenges. 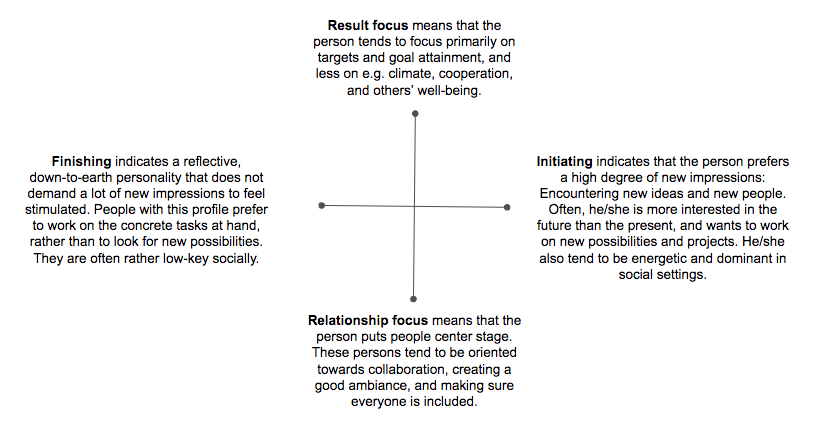