All Collections
Getting started with Alva
Why tests?
Why use tests in candidate assessment?

Why use tests in candidate assessment?

Written by Kajsa Asplund
Updated over a week ago

In this article, we will walk you through four key arguments for using tests in your candidate selection. If you prefer to watch a video on this topic, we recommend the first video of our course Alva 101 – you can find it HERE.

Let's start with the basic facts: Most people agree that hiring is painstakingly difficult. It is usually really tricky to even understand what you are looking for in a candidate. Then, you will also have to find reliable ways of evaluating those characteristics. And, lastly, you will want to avoid bias in the process.

But not only is hiring difficult, it is also really important. Studies show that organisations with a highly effective recruitment process have up to 3.5 times the revenue growth of their less savvy competitors, and they are also twice as profitable. Making the wrong hire, on the other hand, is extremely costly - often up to 2.5 times the annual salary of the position for senior and complex roles.

In other words, solving the challenge of hiring is well worth the effort. According to us at Alva, using psychometric tests is an excellent start. Here are four arguments why:

To summarise, the case is clear: By using evidence-based tests in recruitment, you will substantially increase your hiring accuracy, decrease your number of false negatives, reduce bias and discrimination, and also equip yourself with a scalable screening tool. 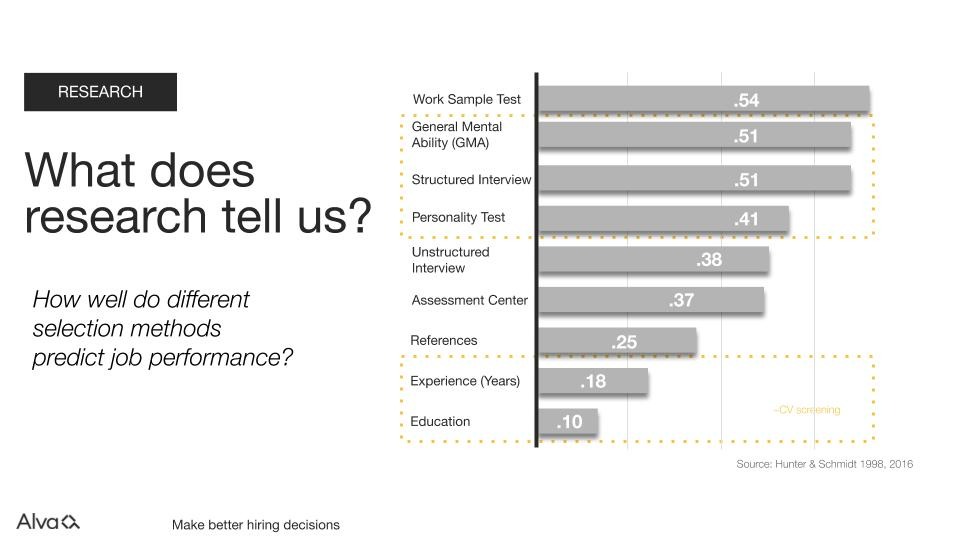